“One of the most important books I’ve ever read – an indispensable guide to thinking clearly about the world”.

It’s certainly one of the most important books I have ever read. 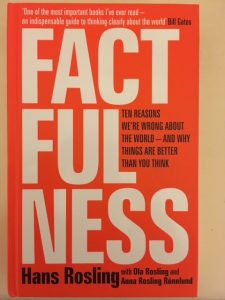 ‘FACTFULNESS, TEN REASONS WE’RE WRONG ABOUT THE WORLD – AND WHY THINGS ARE BETTER THAN YOU THINK’, by Hans Rosling, with Ola Rosling (Hans’ son) and Anna Rosling Rönnlund (Ola’s wife),

it has not only changed my understanding of the world, my worldview, it has, so clearly, informed me as to why my understanding was wrong, why most people’s understanding is wrong – the reasons make SO much sense – AND it has opened my mind to such an extent that I feel that I must evangelise the work of the authors. The work, the effort, which has gone into producing this book is glaringly obvious. The information which is presented as fact is backed up with data supplied by the world’s most respected data sources.

Hans Rosling, who, tragically, passed away on 7 February 2017, at the age of 68, was (quoting from the book) “a medical doctor, professor of international health, and a renowned public educator. He was an advisor to the World Health Organisation and UNICEF and he cofounded  Médecins Sans Frontières in Sweden and the Gapminder Foundation. His TED talks have been viewed more than thirty-five million times, and he was listed as one of Time magazine’s one hundred most influential people in the world. Hans died in 2017, having devoted the last years of his life to writing this book”.

‘Factfulness’: “Ola Rosling and Anna Rosling Rönnlund, Hans’ son and daughter-in-law, are cofounders of the Gapminder Foundation, and Ola its director from 2005 to 2007 and from 2010 to the present day. After Google acquired Trendalyzer, the bubblechart tool invented and designed by Anna and Ola, Ola became head of Google’s Public Data Team and Anna became the team’s senior user-experience (UX) designer. They have both received international awards for their work”

if we do not get the truth out there,

if we do not manage to get the truth acknowledged and accepted,

if we do not manage to show them how to stop being misinformed,

the future is bleak – AND IT NEED NOT BE!!

This book was recommended to me by a member of staff in a bookshop through which I was wandering recently. As soon as I opened it and saw what was on the inside cover, I knew that I was about to enter an Aladdin’s Cave. I hope that Ola and Anna will be ok with me photographing what is on the inside cover of the book and including it in this blog review. I am doing it in the hope – and belief – that it will encourage people to buy the book which, in turn, will help to propagate the messages and lessons.

I appreciate that, even when you click, and zoom in, on the photo, it’s not very clear.

Look, if you can, at the photo of the ‘World Health Chart’ (above):

I was shocked – blown away – by the brilliance of this ‘world health chart’, by its clarity and what it told me – AND what it did tell me is this: I thought, before I read this book, that I had a relatively good understanding of the world but, now that I have read the book, I realise that I was SO wrong.

I don’t think I’m giving too much away by saying that the reason why we misunderstand the world, it goes a lot deeper than why we might think it is:

before I read this book, if I’d just accepted that my worldview was wrong, I’d have assumed that the media and politicians were mostly to blame – the words ‘fake news’ come to mind. The question is: do journalists and politicians deliberately mislead us or are they also misinformed? If they, all, many or some of them, are misinformed, why are they so ignorant of the truth? How have they also been misled!

Why are the vast majority of us so ignorant of the truth, of reality?

The author has identified a number of human instincts, inherent instincts, which ‘kick in’ when ‘news’ is presented to us (and, of course, these instincts ‘kick in’ when news editors and journalists et al are deciding what news to present to the public). These instincts colour the way we see and read the news or, rather, how we understand it, how we sift through it, how we filter it, and what we extrapolate from it, what we conclude. These instincts cause us to over-react, to over-dramatise, and because the news media is a commercial operation, is a business, it is obviously going to filter all of the news in its possession so that it delivers to us only the news which it knows we are going to react to, only the news which it knows will press on one or more of our instinct ‘nerves’.

If I haven’t whetted your appetite yet, maybe the following will do it.

The author, in the book’s introduction, asks a number of questions: the ‘Gapminder Test’. ‘Gapminder’ was founded by the author and Ola and Anna. Gapminder website:

“Gapminder is an independent Swedish foundation with no political, religious or economic affiliations. Gapminder is a fact tank, not a think tank. Gapminder fights devastating misconceptions about global development. Gapminder produces free teaching resources making the world understandable based on reliable statistics. Gapminder promotes a fact-based worldview everyone can understand.  Gapminder collaborates with universities, UN, public agencies and non-governmental organizations. All Gapminder activities are governed by the board. We do not award grants. Gapminder Foundation is registered at Stockholm County Administration Board.”

‘Factfulness’: “Gapminder worked with Ipsos, MORI and Novus to test 12,000 people in 14 countries. Their polls were conducted with online panels weighted to be representative of the adult populations. The test was conducted in Australia, Belgium, Canada, Finland, France, Germany, Hungary, Japan, Norway, South Korea, Spain, Sweden, the United Kingdom, and the United States”.

Two of the 13 questions:

WHAT IS THE LIFE EXPECTANCY OF THE WORLD TODAY (ie, what is the average life expectancy of people IN THE WORLD today)?

I WAS SHOCKED TO LEARN THAT IT IS ‘C’, 70 YEARS. Considering how many people I thought lived in extreme poverty with no education, poor hygiene, very little food, undrinkable water etc., I thought it would be 50 years, 60 MAX.

HOW MANY OF THE WORLD’S 1-YEAR OLD CHILDREN TODAY HAVE BEEN VACCINATED AGAINST SOME DISEASE?

Again, the answer shocked me (even though I knew it had to be higher than I was thinking because of the title of the book!). The answer is ‘C’, 80%.

Ok, so my view of the world was wrong but what about global decision-makers, what about the ‘experts’? Surely, they are better informed than me!

“I have tested audiences from all around the world and from all walks of life: medical students, teachers, university lecturers, eminent scientists, investment bankers, executives in multinational companies, journalists, activists, and even senior political decision makers. These are highly educated people who take an interest in the world. But most of them – a stunning majority of them – get most of the answers wrong. Some of these groups even score worse than the general public; some of the most appalling results came from a group of Nobel laureates and medical researchers. It is not a question of intelligence. Everyone seems to get the world devastatingly wrong.

Not only devastatingly wrong, but systematically wrong. By which I mean that these test result are not random. They are worse than random: they are worse than the results I would get if the people answering my questions had no knowledge at all.

Imagine I decide to head down to the zoo to test out my questions on the chimpanzees. Imagine I take with me huge armfuls of bananas, each marked either A, B, or C, and throw them into the chimpanzee enclosure. Then I stand outside the enclosure, read out each question in a loud, clear voice, and note down, as each chimpanzee’s “answer”, the letter on the banana she next chooses to eat.

If I did this, (and I wouldn’t ever actually do this, but just imagine), the chimps, by picking randomly, would do consistently better than the well-educated but deluded human beings who take my tests. Through pure luck, the troop of chimps would score 33% on each three-answer question, or four out of the first 12 on the whole test. Remember that the humans I have tested get on average just two out of 12 on the same test.

What’s more, the chimps’ errors would be equally shared between the two wrong answers, whereas the human errors all tend to be in one direction. Every group of people I ask thinks the world is more frightening, more violent, and more hopeless – in short, more dramatic – than it really is.”

This is, of course, shocking but why does it matter, you might ask?

1) people who are suffering will continue to suffer needlessly, in poverty, in sickness, in thirst and hunger, in so many tragic ways;

2) time, money and expertise which should be addressing climate change and environmental issues will be misdirected which could have a cataclysmic result;

4) there will be missed commercial and financial opportunities, which, if they were taken:

a) would benefit the companies making the investments;

b) would benefit the employees;

c) would benefit the local and national economy through the ‘multiplier effect’, i.e. the employees would spend some of their income, for example, in shops which might then expand their operations, employ more staff who would spend their income in the retail economy and so on…

d) would benefit the institutional shareholders;

e) would benefit, for instance, pensioners who do well financially when the companies in which their money is invested thrive;

f) would benefit the countries in which they are established by virtue of tax receipts;

g) would benefit countries in which they expand, again by virtue of tax receipts;

h) would benefit workers currently living in poverty in countries in which companies invest, thereby helping to raise more people out of poverty.

5) worry and stress will dominate our lives to an unnecessary extent.

FURTHERMORE, IGNORANCE FUELS ARROGANCE, INTOLERANCE, RACISM, BIGOTRY AND HATRED. If people were less stressed about the world, about the state of the world, if people weren’t blaming other people for situations which don’t actually exists, there would be more harmony in the world.

If our understanding of the world, our worldview, reflects reality, it we learn to control our inherent instincts when reading the ‘news’ AND propaganda, it will be more difficult for populist demagogues to mislead us.

In summary, if it wasn’t for this global ignorance, the world would be a better place!

The work spearheaded by Hans Rosling, with the invaluable assistance of his son, Ola, and daughter-in-law, Anna, is outstanding and is critically and globally important.

Hans’ life was tragically cut short. He had so much invaluable work still to do but I have no doubt that he’ll have been at peace in the knowledge that Ola and Anna would:

continue his, and their, work;

bring more and more people to the cause of breaking down the walls of ignorance which separate the lives we live from the lives which we could, and should, be living now and in the future.

EVERYONE MUST READ THIS BOOK!